HomeReviews in english The Woman in Cabin 10 **(*) 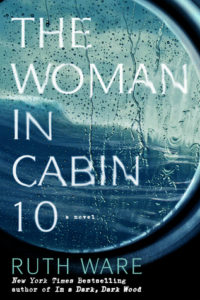 Lo Blacklock, a journalist who writes for a travel magazine, has just been given the assignment of a lifetime: a week on a luxury cruise with only a handful of cabins. The sky is clear, the waters calm, and the veneered, select guests jovial as the exclusive cruise ship, the Aurora, begins her voyage in the picturesque North Sea. At first, Lo’s stay is nothing but pleasant: the cabins are plush, the dinner parties are sparkling, and the guests are elegant. But as the week wears on, frigid winds whip the deck, gray skies fall, and Lo witnesses what she can only describe as a dark and terrifying nightmare: a woman being thrown overboard. The problem? All passengers remain accounted for—and so, the ship sails on as if nothing has happened, despite Lo’s desperate attempts to convey that something (or someone) has gone terribly, terribly wrong…

Books like Gone Girl and The Girl on the Train seemed to start a new trend in writing: the female protagonist has to be unstable/imperfect, and best so if these imperfections makes her surroundings question her mental stability. And I am okay with that – but it only works well, if the protagonist is actually someone you can root for …

Lo is a mess! A drunken, whining, half depressive mess! And after a break-in, a fight with the boyfriend and lack of sleep, a luxury cruise sounds like the best thing. But on board the cruise ship, Lo hears screaming and finds tracks of blood from the cabin next door – so why does everybody insist that nobody lived in Cabin 10? Did her stressed out mind start making up things – or is Lo the only one with the answers?

The story in itself is actually quite good, but Lo as a characters is just so utterly annoying that it destroys the book. The fact that the book took place on a ship added something, since the isolation and the developing group dynamics was a factor – but still I kept feeling like when you watch a reality TV-show: You don’t really know why you keep watching, but you still do.

The author seemed to have found some inspiration in Agatha Christie – and way to much inspiration from The Girl on The Train. But the plot is just a little bit to unbelievable, and I had the feeling of an author who just tried to hard (but at least Lo had a cat – so there is that :-)).

As decent psychological thrillers go, this will never make my favorite list – but if you find yourself on a beach with free books – and need a light reading – then go ahead.